Like most analgesics from the opioid group, oxycodone is used primarily for severe and very severe pain. Oxycodone is about twice as strong as morphine and is therefore not one of the extremely strong opioids. 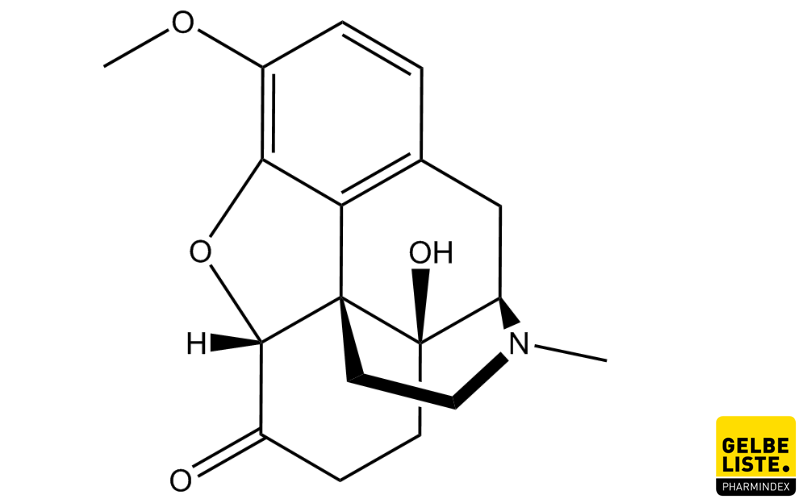 The active ingredient oxycodone is indicated for the therapy of severe pain that can only be adequately treated with opioid analgesics. The combination with naloxone is intended to counteract constipation that can occur during opioid therapy.

Oxycodone has an activating effect on µ-, κ- and δ-opioid receptors in the brain and spinal cord. Oxycodone acts on these receptors as an opioid agonist without an antagonistic effect. Its therapeutic effect is mainly analgesic and sedating. As with all opioids, the use of oxycodone is associated with the risk of developing addiction.

With regard to the pharmacokinetics of oxycodone, it should be noted that the active ingredient is also available in the form of sustained-release formulations.

After oral administration, the absolute bioavailability of oxycodone is 42-87%, the maximum plasma concentration is reached after about 1 to 1.5 hours, with prolonged-release tablets after 3 hours. In the case of prolonged-release tablets, absorption takes place in two phases with an initially relatively short half-life of 0.6 hours for the smaller part of the amount of active ingredient. The second absorption phase is slower and lasts about 6.9 hours.

Oxycodone is metabolized in the intestine and liver via the P450 cytochrome system to noroxycodone, oxymorphone and various glucuronide conjugates. The route of elimination is 33-61% renal.

Oxycodone is mainly available in the form of prolonged-release tablets. The dosage should be adjusted to the intensity of pain and the individual sensitivity of the patient. The starting dose for opioid-naïve patients is usually 10 mg every 12 hours for prolonged-release formulations. Further dosages can be found in the respective technical information.

Since dependence can develop on oxycodone therapy, therapy should not be stopped abruptly.

The most common side effects of oxycodone therapy are nausea and constipation. In addition, respiratory depression, miosis, spasms of the bronchial muscles and a dampening of the cough reflex can occur.

The side effects are listed below according to their frequency.

Side effects of unknown frequency:

With the simultaneous use of oxycodone and drugs that have an effect on the CNS, the CNS depressant effect can be increased. This includes other opioids, sedatives, hypnotics, antidepressants, phenothiazines, neuroleptics, anesthetics, muscle relaxants, antihistamines and antiemetics.

Monoamine oxidase inhibitors (MAOIs) and oxycodone should be administered with caution. This also applies to patients who have received MAOIs in the past two weeks.

Concomitant use of oxycodone and alcohol should be avoided.

CYP3A4 inhibitors can reduce the clearance of oxycodone. The resulting increase in the plasma concentration of oxycodone may have to be countered by adjusting the dose.

The CYP3A4 inhibitors include:

CYP3A4 inducers may increase the clearance of oxycodone. Here, too, the oxycodone dosage may have to be adjusted to avoid a reduction in the plasma concentration.

CYP2D6 inhibitors, such as paroxetine and quinidine, can reduce clearance and thus increase the plasma concentration of oxycodone.

To what extent the metabolism of oxycodone is influenced by other relevant isoenzyme inhibitors of the cytochrome system is unclear. Possible interactions should be considered.

In rare cases, there has been a clinically relevant decrease or increase in the International Normalized Ration (INR) with simultaneous use of oxycodone and coumarin-based anticoagulants.

Hypersensitivity to oxycodone or any of the other ingredients of the drug in question is a contraindication.

Furthermore, oxycodone must not be used in situations where opioids are contraindicated. Which includes:

The use of oxycodone during pregnancy and breastfeeding should be avoided as much as possible, as it can lead to respiratory depression and withdrawal symptoms in newborns and infants.

In animal studies, oxycodone did not show any negative effects on fertility. Human data are not available.

Oxycodone can change alertness and the ability to react to such an extent that active participation in road traffic or the use of machines is impaired or no longer permitted.

A general driving ban is not absolutely necessary for patients with stable therapy. The assessment must be made individually by the attending physician.

Further details on this active ingredient can be found in the relevant information for professionals.