Why is Nepal angry with India

"Before the police could arrest me, I escaped with the others through the back door," says Pasang Chunda Lama. The student wanted to peacefully celebrate the Dalai Lama's 81st birthday in the Tibetan enclave of Boudha. Several hundred Tibetans in exile came to the festival in northern Kathmandu at the beginning of July. But before it really started, the police cleared the area.

Thirty Tibetans were arrested, including members of the Tibetan government in exile. "We have been preparing for this day for months. We set up a stage and pavilions, practiced songs and dances," says Lama. He is disappointed and angry. According to a Tibetan news portal, the authorities had previously approved the celebration in honor of the Tibetan leader.

The pressure on Tibetans living in Nepal has been increasing as Beijing's influence has grown. The six-month blockade of the border with India in 2015, for which the government in Kathmandu blamed New Delhi, had cooled relations between Nepal and India. The trigger for the crisis were the protests of the Madhesi ethnic group in the south of Nepal, who see themselves disadvantaged by the new constitution. This also led to a rapprochement with China. "The Chinese government is generous, distributed aid after the earthquake in April 2015 and promised investments in the infrastructure. In truth, however, it has cleverly used the emergency in Nepal for itself," says Nadine Baumann, Managing Director of the Tibet Initiative Germany.

China is now the largest investor in the poorest country in South Asia. But development aid is not free. In return, Beijing is demanding stronger border security from Kathmandu on the 1,236-kilometer common border. According to a confidential message from the American embassy published by WikiLeaks in 2010, Beijing is demanding that Kathmandu reinforce the border troops. In addition, "China rewards Nepalese military by giving them financial incentives for extraditing Tibetans who want to flee across the border," the document said. 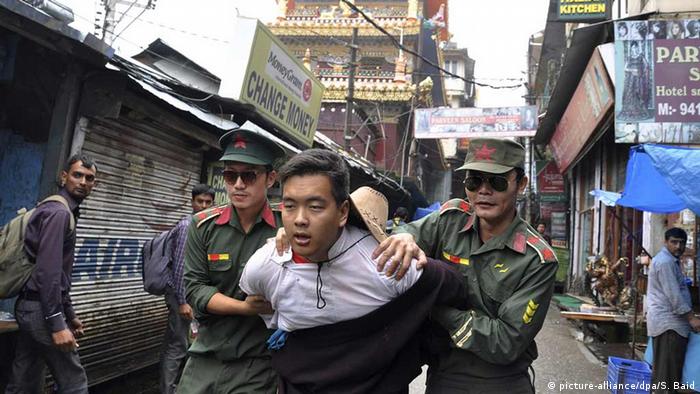 Protest: A Tibetan exile is arrested by two activists disguised as Chinese police in Dharamsala, India

China sees the fleeing Tibetans as a threat to its sovereignty. For the former Chinese ambassador to Nepal Sun Heping, the exiled Tibetans are "illegal border crossers and thus criminals who carry out anti-Chinese activities in Nepal in the name of religion."

At the edge of society

About 20,000 Tibetans live in Nepal. Many of them live in former reception camps that have become permanent settlements over time. The largest communities are in Kathmandu and Pokhara with up to 1000 people. The tiny houses are lined up close together. Temporary corrugated iron huts and neat bungalows alternate. The residents, who can afford it, have painted them in light colors. Often up to three generations live together in a confined space in one or two rooms. The Tibetan prayer flags - red, green, yellow, blue, white - flutter over the streets and in the gardens. Graffiti with the words "Free Tibet" is on numerous house walls.

The structures are consolidated. Because the total of twelve settlements, many of which have existed since the first wave of refugees in the early 1960s, are under the control of the Tibetan government in exile. There are Tibetan schools, monasteries, supermarkets and even clinics in the communities. This is how a Tibetan society developed that does not have much contact with the Nepalese.

"Especially for the younger generation, who are suffering from increasingly harsh politics, there are no prospects in the country. There is neither the possibility of integrating into everyday life in Nepal, nor of living the Tibetan identity," says Baumann from Tibet Initiative Germany. Kathmandu has not issued official documents to Tibetans since 1989. According to estimates by the UN Refugee Agency, half of the refugees living in Nepal now have no papers. 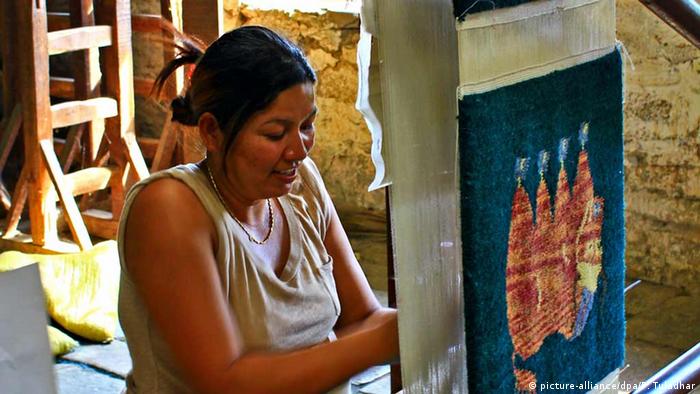 Without papers they are not allowed to go to school and therefore find work only with difficulty. Outside the settlements, they have found their niches in tourism, gastronomy, and the sale of Tibetan souvenirs. They built up a whole industry with the weaving and trading of carpets. Officially, however, Tibetans are only allowed to work in these areas with a residence permit. Some fear that China could increase pressure in these last niches as well.

In the shadow of the mighty

Even the newly elected Prime Minister Pushpa Kamal Dahal at the beginning of August will probably not change that. The leader of the Maoist movement had been prime minister for a short time in 2008 and initiated rapprochement with China. In several interviews, he affirmed that he would uphold the agreements between his predecessor Khadga Prasad Sharma Oli and Beijing that were negotiated in the spring of 2016. "We are striving for a balance in external relations with India and China." The hope: India and China share the investments. India receives the orders for hydropower, China is financing the infrastructure for its new Silk Road project.

For the Tibetans in exile, this means that Beijing's influence will not diminish in the foreseeable future, said Nadine Baumann. "In the future, it will generally be harder for the Tibetan refugees who are still living in Nepal, and it will be almost impossible for more people to gain a foothold in Nepal."