What if the global economic crisis never ended? 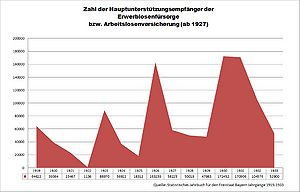 Number of main recipients of unemployment benefit or unemployment insurance (from 1927). (Source: Statistical Yearbook for the Free State of Bavaria, years 1919-1933)

The economic crisis, which had already been evident since 1928, worsened significantly after the stock market crash of October 24, 1929. All areas of economic life were affected - agriculture, industry and trade as well as trade and services. In contrast to other regions in Germany, Bavaria was not as badly affected (lower unemployment rate). The peak of the unemployment figures was reached in the winter of 1931/32, from the end of 1932 the economic situation improved again.

Beginning of the crisis

The global economic crisis, the first dramatic sign of which was not triggered by "Black Friday" on the New York Stock Exchange on October 24, 1929, affected the German states and regions with varying degrees of intensity. In the interval between the detailed population and company censuses in 1925 and 1933, the number of those employed in trade and industry decreased by 30.3% in the Reich, in Saxony by 37.3%, in Prussia by 31.9%, in Bavaria by 21, 2%, in Württemberg by 15.3%. At the same time, in Bavaria - similar to Württemberg - the number of employees in the trade and transport sector rose by 6.2%, while it fell slightly across the country (-1.2%). (StDR 466, 103).

These figures initially confirm that Bavaria was only moderately affected by the crisis and also show the structural change that took place in the late 1920s and early 1930s towards the expansion of the service sector. However, they cannot reflect important aspects such as the effects on Bavaria at that time, which were still economically in large parts of the agriculture, as well as regional peculiarities.

Shortly after the inflation of 1923, the global overproduction crisis hit German agriculture. Together with the increasing tax burden, which around 1925 was three to four times as much as the last pre-war years, it turned into a depression by the end of the decade, even for the mostly small to medium-sized farms in Bavaria. While the slight increase in the price of agricultural products in the 1920s initially stabilized the situation, a clear downward trend began as early as 1928: physical goods, necessary for cultivation and cattle breeding, also fell in nominal terms in the following years, but this could lead to a far more violent decline not compensate for the proceeds generated. (Price index for non-domestic operating resources, financial year 1928/29: 100.2, 1932/33: 74.4; agricultural products 1928/29: 100.8, 1932/33: 58.5; basis 1927/29 = 100) (Zeitschrift des Bay State Statistical Office 69 [1937], 28).

The crisis in industry and trade reached Bavarian agriculture via the detour of the general decline in purchasing power, which had a particularly marked effect on the price of meat: The prices for slaughtered cattle in Munich halved between 1929 and 1933. Grain prices in Bavaria were much more stable Rye and Wheat - almost maintained their level in the same period. The Bavarian cattle breeders were thus much more affected by the crisis than the grain farmers.

Farmers in regions such as the edge of the Alps, who were dependent on timber sales in addition to cattle breeding, were hit particularly hard. The lumber index (base 1928/30 = 100) fell to 62.8 by 1933 due to a lack of demand and Russian dumping exports. The consequences were a surge in debt and an increase in payments (= bankruptcies). In 1928 415 farms in Bavaria were foreclosed, in 1932 there were 1,923.

With the restoration of regulated money transactions in Germany at the turn of the year 1923/24, production expanded enormously in Bavaria until 1927, with minor interruptions. However, signs of stagnation appeared as early as 1928. Because of the unusually harsh winter in Bavaria in 1928/29, the unemployment rate skyrocketed. After that, they only sank slowly, and by the summer of 1929 the collapse in the building industry gave rise to fears that unemployment would rise sharply in the next winter.

The construction industry in particular clearly shows the effects of the crisis on various company sizes for the years up to 1933: While almost two thirds of those employed in construction and ancillary construction lost their jobs by 1933 compared to the 1925 figure in Bavaria, the number of companies rose by around 10%. Rural small and micro-enterprises often had to keep a minimum number of employees in order to be able to work at all, but in many cases lived on the substance. Many unemployed people burdened the market as cheap illegal workers, others tried to keep their heads above water by founding micro-firms.

The credit and banking crisis of 1931 primarily endangered the liquidity of larger companies. In the Bavarian cities of Munich, Augsburg and Nuremberg, the decline of the traditional machine and vehicle construction was very noticeable. Throughout Bavaria, the number of employees in this area fell by half between 1925 and 1933. Creditor banks took over the ailing Bayerische Motoren Werke, Kraus and Maffei were merged. In the winter of 1931/32 there were over 58,000 unemployed in Nuremberg and over 73,000 in Munich.

A look at the traditional industrial locations in northern Upper Franconia shows how different the effects of the crisis could be in a confined space in different industries, but also within one branch of production. The already ailing porcelain industry, which had been suffering from increased competitive pressure on the world market since the 1920s, was now also hit by the decline in consumption of the crisis years. In Selb, the hours worked in this branch of production decreased by 64% between 1929 and 1932. Short-time work and layoffs also prevailed in Hof's textile industry, while the employment office for the nearby Münchberg district reported consistently good employment figures. In the autumn of 1932, workers even had to be recruited from the surrounding districts in order to ensure production in view of the beginning economic upswing.

In the years of the global economic crisis, Bavarian trade had to struggle with two main factors: The number of shops, which had risen since the mid-1920s and even continued to grow during the years of the Depression, not least due to the expansion of chain stores, was the decline in purchasing power of the population across from. The earnings of the individual companies, often small family businesses, fell noticeably. The consequence was the use of reserves until the onset of impoverishment.

In the service sector, the Bavarian catering trade was able to hold its own in terms of both company and employment figures, and the number of overnight stays in tourism, which is important for some regions, only fell moderately. On the other hand, service providers such as hairdressers, whose work had become a luxury for many people, still found customers through strong price discounts.

Bad times broke out for domestic workers: the economic decline of the middle class "rulers" brought many people out of their jobs. There were also personnel savings at the state-owned railways and post offices, but in the latter case the progressive expansion of the telecommunications network compensated for some rationalization elsewhere.

Unemployment and its Effects

Unemployment in industrial centers can be seen as a significant indicator of the crisis; in the small-town rural area, which made up large parts of Bavaria, it is often overrated. In the rural areas of Bavaria with larger operating units, for example in the fertile parts of Lower Bavaria, the return of urban-industrial workers to the countryside was initially welcomed, as it helped to make up for the lack of male and female servants, which was always lamented, on favorable terms.

But here, too, saturation set in, so that as the crisis progressed, unemployment also became a problem in rural areas. In mid-June 1933, already in a phase of the subsiding crisis, 26.2% of employable workers, 17.8% of salaried employees and 11.1% of domestic workers were still unemployed.

Unemployment brought drastic financial cuts for those affected, especially as the crisis lasted. Those who were "steered" out of the unemployment benefit ended up with the lower support rates of the crisis support and were ultimately dependent on the communal welfare assistance. In Bavaria, the number of recipients of unemployment benefits fell from 275,000 to 101,000 between January 1931 and January 1933, while the municipalities now had to support 179,000 recipients of welfare instead of 57,000. Many urban and communal households collapsed under this strain, and municipal investments that could have created jobs fell by the wayside.

The impoverishment of broad strata of the population made itself felt in many ways: complaints about the "beggar nuisance" were loud, illnesses caused by deficiency spread, crime and suicide rates increased. To support citizens in need, many cities and municipalities organized soup kitchens and fundraising campaigns. Grain was collected from farmers in the grain regions, such as the Gäuboden, for their colleagues in the foothills of the Alps and in the Bavarian Forest.

The deterioration in living conditions also influenced political behavior. Sections of the population that were particularly affected by the crisis and who were dissatisfied increasingly switched to the camp of radical parties, but political Catholicism in particular proved to be a stabilizing factor. The personal economic impact was therefore not an inevitable trigger for the political decision.

The end of the crisis

In the winter of 1931/32 the number of unemployed peaked and by the end of 1932 there were first signs of a stabilization of the economic situation. After the National Socialists came to power, their crisis management strategy - now linked to an initially latent rearmament policy - resorted to existing plans for increased state interventionism.

To combat unemployment, propagandistically inflated, credit-financed large-scale projects such as the construction of the motorway, which was based on initial planning in the 1920s, and the introduction of the initially voluntary labor service, which was compulsory from 1935 onwards, along with general conscription.

As in the USA and England, unemployment figures in Germany fell continuously until the mid-1930s (in Nuremberg from around 58,000 at the beginning of 1933 to 36,000 by the end of 1934), and full employment was approaching as early as 1936. Bavaria was no exception, but individual monostructural areas - such as the porcelain region of Upper Franconia near the border - did not experience the upswing until late: Here, the level of employment and income levels were still well below the national average and the level before the economic crisis began in the mid-1930s.