The A series is a multi-core CPU with an integrated GPU from the medium price-performance segment. The CPU-GPU combination is referred to by AMD as an APU (Accelerated Processing Unit).
Instead of a melodious product name such as Sempron, Athlon, Phenom and Turion, AMD only uses the abbreviations A12, A10, A8, A6 and A4, followed by a number.

The A series is tailored to the "PC with integrated graphics for 400 to 500 euros" market segment. In terms of performance, the A series can just about keep up with an Intel Core i3.
The APUs from AMD are perfectly adequate for inexpensive complete PCs. If you need more power, you can turn to the AMD FX or an Intel CPU. In comparison, the AMD A10-7800 is about as fast as an Intel Core i7-4130.

The successor to the A series is Ryzen.

The first generation of APU processors roughly corresponds to a K10 core, as it was already used in the Athlon X4 and Phenom X4. However, the APU lacks the L3 cache, which results in a considerable loss of performance and has to be compensated for with a higher clock rate. The L2 cache of each core is 1 Mbyte in size.
Just like its predecessors, the A series has dynamic energy management (Turbo Boost). In this way, the APUs can adapt their clock frequency and power consumption to the application.
In terms of performance, a Llano APU can just about keep up with the Core 2 Quad from Intel. Because an A8 is only a bit faster than an Athlon II (X4) with the same clock frequency. The CPU performance and power consumption are disappointing.

The A series has a 3D and HD-compatible DirectX 11 graphics unit. It contains two DirectX 11-capable SIMD units and 80 shader processors. The graphics unit relieves the CPU cores when playing HD videos from Blu-ray Disc and from the web.

The connection between the cores, the memory and the GPU is handled by an integrated Northbridge, which is known as the Fusion Controller Hub (CNB). Instead of HyperTransport, the processor has a PCI Express 2.0 and a Unified Media Interface. This is a slightly modified PCI Express x4 interface. For the display, the processor leads a DisplayPort (V1.1) and an HDMI interface (V1.4) to the outside.
The processor architecture includes an integrated PCI Express Root Complex, which lowers latency and lowers idle power consumption. The chipset (Fusion Controller Hub) is only required for connecting external interfaces. 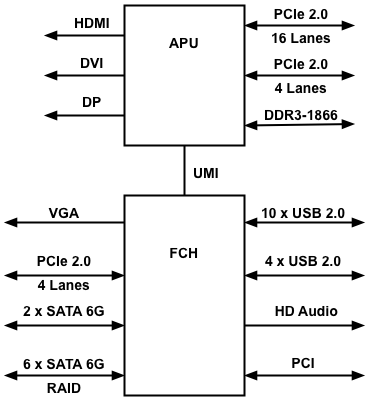 In the second generation of the A series processors, the Trinity cores replace the Llano cores of the outdated K10 architecture. The Bulldozer architecture provides that the processor cores share resources. For example the FPU and the instruction cache, which is unsuitable for multi-core operation, and also the command decoders.
In addition to a mid-range graphics unit, the APU contains several revised Trinity cores that are said to be 25 percent faster than the Llano cores.
The quad-core models have a GPU, a PCIe connection for an external graphics card and a memory controller for DDR3-1866. The APU architecture consists of two Bulldozer modules, each of which has two integer cores and a floating point unit that can process one AVX or two 128-bit SSE instructions. There is a 2 Mbyte L2 cache per bulldozer module. There is no L3 cache.
The PCIe 2.0 lanes for a graphics card are brought out directly from the processor. The chipset Fusion Controller Hub (FCH) is attached to the APU via the Universal Media Interface (UMI). The UMI is a modified PCIe 2.0 x4 connection. UMI transfers a maximum of 2 GB per second and direction of transfer.
All connections are brought out via the FM2 slot.

The speed gain is clear compared to the K10 architecture. Nevertheless, the A series from AMD is more comparable to Intel's Core i3. Whereby AMD has a stronger 3D calculation.

The Bulldozer architecture fell short of expectations due to some conceptual weaknesses. Various improvements were introduced with the Richland architecture, but this did not lead to significant performance leaps.

Kaveri processors consist of CPU cores of the Steamroller generation, a Radeon GPU of the R7 series with GCN architecture and a programmable sound processor. The R7 graphics unit is compatible with DirectX 11.2, OpenGL 4.3 and Mantle. In the Kaveri, the CPU and GPU are even more fused. They have a common memory area (HUMA, heterogeneous Uniform Memory Access) and are connected to one another via hq (Heterogeneous Queuing). This makes it possible for software to use the CPU and GPU in parallel if necessary.
The technologies are part of the Heterogeneous Systems Architecture (HSA) from which the AMD combination processors emerge, in which the CPU and GPU are merged.
However, it will be a few years before a large number of applications can benefit from it. The necessary software support (drivers, libraries, compilers, etc.) is simply missing.

The Steamroller CPU core contains four cores, which are distributed over two modules, each with its own L2 cache. There is no L3 cache.
The GPU core is called Graphics Core Next (GCN architecture), which is based on the architecture of the graphics unit in the XBox One and the Playstation 4. The GPU consists of 6 or 8 compute units. Each contains 64 shader cores. As a total of 384 or 512 shader cores. In addition, the GPU core offers HD video units for playback (Unified Video Decoder / UVD) and for transcoding (Video Compression Engine / VCE). The graphics unit thus occupies 47 percent of the total die area.
The programmable sound processor with the designation AMD TrueAudio can take over the calculation of 3D multichannel sound and thereby relieve the CPU cores.

In the absence of usable public information, a description must be dispensed with here.

Bristol Ridge is a System-on-Chip (SoC) based on the old Bulldozer architecture in the Excavator version, from which AMD got everything out of it. In addition to the PCIe root complex, it also brings controllers for SATA-6G and USB 3.0. The mobile processor for notebooks, at least in theory, manages without an additional chipset.

Most of the A-series models from AMD are based on what is known as the Bulldozer micro-architecture. The result of the development of this architecture can be described as a disaster. In addition to the far too weak single thread performance, floating point and SIMD calculations are only insufficiently supported. The particular weakness of this architecture is the connection between the computing cores to the overall system. Their connection is already overwhelmed with the computing power of two cores. What is meant is that the arithmetic units have starved to death due to a lack of supplies. The potential of the performance of the bulldozer architecture could never really be used. Over the generations of bulldozers, it has been optimized over and over again, but that has not achieved much.

The successor to the Bulldozer micro-architecture is the Zen architecture from which the Ryzen processors emerged.

Everything you need to know about computer technology.

Everything you need to know about computer technology.