Should Germany, Austria and Switzerland merge

After a computer picture, chip and connect, the network analysis tool OpenSignal speaks up again. In its recent analysis of global cellular networks, OpenSignal saw a fairly wide range of user experiences across Europe, writes Peter Boyland on the company's website.

OpenSignal gathered user experiences in Austria, Germany and Switzerland. The Swiss customers who use OpenSignal "enjoy the best speeds and 4G availability, while the Austrians have the highest quality mobile video experience".

OpenSignal noticed that the German users "lag behind their two DACH neighbors quite a long way" in most of the comparison points.

The problem of statistical comparisons 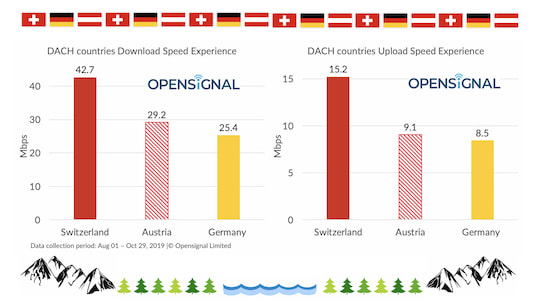 Opensignal compares the average download and upload values ​​between the countries. Germany (yellow) doesn't look good here
Graphic: Opensignal And with that the basic problem of the method comes to the fore: If a really good and a really bad network are launched in a country, the country receives a statistical overall rating of a rather "bad" network, which in reality it doesn't gives. Because: National roaming, which means that German customers do not have a choice, unless they are traveling with two to three (dual SIM) cell phones with three SIM cards. And then they would use the "best network" on site.

The latest report shows some significant improvements in Switzerland, particularly at Swisscom, which are benefiting from the use of a higher frequency spectrum in urban areas.

Germany is maintaining a high pace 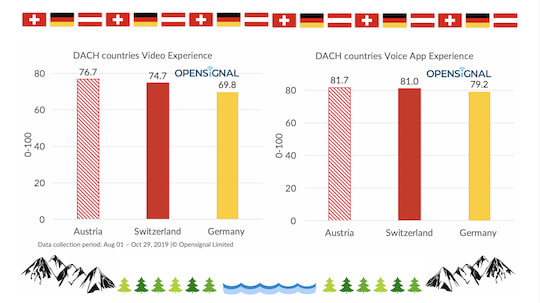 After all, even Germany can keep up with video signals
Graphic: Opensignal In comparison, Telekom in Germany considered both awards to be the best speed compared to the penultimate report - so the analysis was carried out separately by network. But, according to OpenSignal, there has been no statistical growth in download or upload over the past six months. This could mean that Germany will lag behind its DACH neighbors next year.

However, Switzerland was not able to achieve the DACH crown in all measuring points. With both the video and the OTT Voice app, users in Austria had a better "customer experience" - although Switzerland was very close to the market leader in both key figures. After all, OpenSignal has noticed some improvement in video broadcasts in Germany. 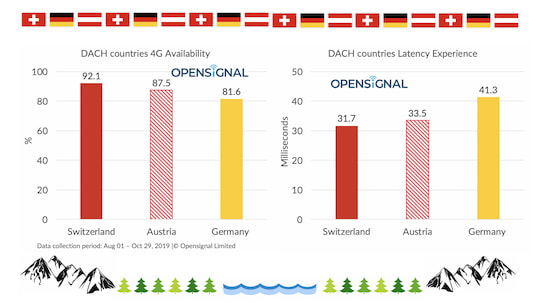 In terms of 4G availability and latencies, "statistical Germany" also lags behind.
Graphic: Opensignal Although Germany is significantly larger in area than Austria or Switzerland, "the three have a lot in common economically and geopolitically: their mobile markets have largely developed in parallel," says OpenSignal. All three markets have a "dominant former established market participant" - ie Deutsche Telekom, Austria Telecom or Swisscom - and have experienced changes in competition due to mergers or the exit of a large European company. In Germany, this means the merger of E-Plus with O2, Switzerland Orange has sold Orange Switzerland and in Austria the merger of Drei and Orange.at/One applies.

In some markets, the differences between operators are large. Nevertheless, in terms of the latest Germany report, the market leader still lags behind the national averages of Austria and Switzerland for most of the key figures relevant to OpenSignal. Only in terms of speed was Telekom able to outperform the Austrian national average.

How does OpenSignal rate?

OpenSignal's analysis and measurement process focuses on "realistic, user-oriented measurements". OpenSignal aims to measure "the experiences everyday users have on their wireless networks". There is a firm belief that the user experience must be at the center of any mobile communications offering, something every reader can agree with.

The comparison of OpenSignal with regard to the DACH countries shows that there is still quite a big difference in experience with cellular networks in these similar European markets. Who is surprised.