Accusation of racism at the University of Leipzig: Exchange of emails with an ugly note

A Leipzig professor has rejected an internship from an Indian applicant. The shape she chose for it is a source of criticism. 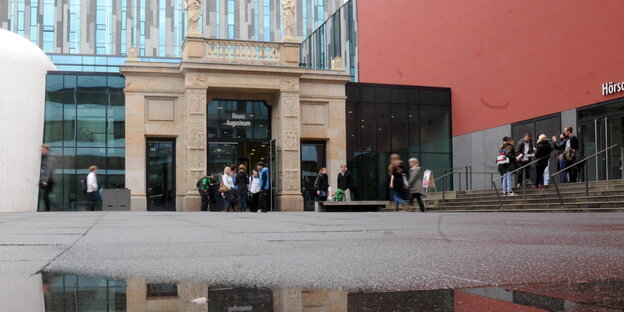 Entrance to the library and lecture hall of the University of Leipzig. Image: imago / Stefan Noebel-Heise

LEIPZIG taz | The University of Leipzig is confronted with an allegation of racism. A professor had rejected an application for an internship from an Indian student, with a peculiar reason. The email from biochemistry professor Annette Beck-Sickinger sounds clear: “Unfortunately, I am not offering any internship positions to male Indian students. We hear a lot here about the rape problem, which there is no way I can support. Precisely because I have female students in my courses, I cannot support such an attitude. "

The university professor wrote this over the weekend to an Indian student who, like many others, had applied for a laboratory internship. It quickly turned out that the words really had been said, the only question being in what context, whether as an initial reaction or as part of a further exchange of e-mails.

Beck-Sickinger later apologized for her choice of words. She informed the university management that she was “anything but racist and xenophobic”. The real reason for the rejection of the internship is that there are simply no more places. The mail as it is now presented is falsified in its form, out of context. Because in the further course of the mail there was a discussion about "the problem of rape of women in India".

The statements from the e-mail exchange appeared on the American online portal Quora on Monday morning. They quickly spread on the net. The anonymous author published a screenshot of Beck-Sickinger's answer, another unknown author a question to the professor, as a result of which she addresses the problem of generalization. In it, she emphasizes that her argumentation does not, of course, apply to the individual case. But Beck-Sickinger is also stepping up again, writes of many female professors in Europe who would now have to draw "conclusions" due to the problems of Indian society.

The comments under the forum entry quickly find a name for your argumentation. This is sexist and racist. Some users are calling for protests against the University of Leipzig and even the German government. Several Indian media reports on the case. The German ambassador in New Delhi published his protest on Twitter.

Beck-Sickinger said to the taz: “I think the student was just angry and wanted to get revenge. But that's character assassination ”. It is important to her to emphasize that her accusation only arose in the course of the e-mail conversation and was not right at the beginning. However, she does not want to publish the entire exchange - it could bring clarity.

Rector Prof. Beate Schücking, who intervened in the case, also suspected that the correspondence was problematic. She welcomed the apology with which Beck-Sickinger "took the right path to avoid misunderstandings". She also emphasized that the university was open to the world and there “no place for racist thoughts and expressions”. An English-language press release was later published.

The time was extremely inconvenient, because on Monday evening the Leipzig Pegida offshoot Legida took to the streets again. Schücking had clearly criticized its first demonstration on January 8, referring to “xenophobic, nationalist and sexist positions” and “diffuse fears”. As she went on to explain at the time, the universities in Leipzig “also need in the future the free exchange of ideas and the open atmosphere that prevails in our city, which enables fearless engagement with the new and fascinates people from all over the world.” now forfeit.