Which Korean drama is realistic

South Korea at the Heidelberger Stückemarkt
Politics, Poetry and Pop

The Heidelberger Stückemarkt, next to its counterparts in Mülheim and Berlin the most important showcase for new plays in Germany, also presents works from different host countries every year. In 2018, South Korea was the first Asian country to visit Heidelberg.

The timing could hardly have been better: While Moon Jae-in and Kim Jong-un shook hands on the borderline at the summit, more than sixty actors, directors, technicians and, of course, authors from Korea arrived in sunny Heidelberg. In addition to six German pieces, actors from the Heidelberg ensemble also presented three Korean works translated into German in the form of readings, and three guest performances were also shown. What can theater look like today, how can it sound? Which social problems can be thematized and made tangible on stage? And what does Korean pieces actually resonate with in a German context? With these questions in mind, HeeJin Lee and Jürgen Berger, the two “scouts” of the Stückemarkt, made a selection of dramas that set clear political accents and stylistically represented a broad spectrum.

Korea at the International Authors' Competition

With his "Chronicle of Alibis", Kim Jae-yeop undertook an autobiographical approach to his own father. Kim appears in the form of an alter ego and encounters, as if on a journey through time, the father in various life situations up to the deathbed. The piece thus strikes a wide arc from Japan in the 1930s through various South Korean dictatorships to the present day democracy. Seeing father and son in dialogue made language barriers forgotten and showed that “Chronicle of Alibis” not only provides, as the jury put it in their statement, a “course into the closer history of Korea”, but above all is also a family history .

The political drama “The Yellow Envelope” by Yanggu Yi, on the other hand, is set in the recent past: In the spring of 2014, when the overloaded ferry Sewol sank off the coast of Korea and killed hundreds of high school students. But first of all, it was not without humor that the play portrayed the depressed atmosphere in the union office of an auto parts factory during a doomed strike. In fact, "The Yellow Envelope" is based on real events and was created as part of a solidarity campaign with workers who were showered with claims for damages because of a strike, the author explained in the subsequent audience discussion. Only in the course of the play do reports of the catastrophe gradually break into the main plot. Initial hope, then mourning for the children and frustration in the face of the overwhelming management of the company go hand in hand, providing motivation for desperate actions. At first it sounded a bit strange when characters with names like Byeongno and Jiho discuss the taste of the kimchi ration in German, but the thrust of this drama - "a piece of time in the best sense", according to the jury - soon became clear.

Yeon-ok Koh had her piece "A Wife's Feeling" started in the forest like a fairy tale. Here the main character, a nameless woman, was raised by a bear, to whom she eventually gave birth to a child. The problems then begin back in civilization: from childcare through professional and married life to care for the elderly, the drama thematizes the contradicting roles of women in modern Korean society, always with recourse to traditional myths. The individual episodes, although dramatically exaggerated, are often perceived as very realistic by the Korean audience, according to the author in the follow-up discussion. The challenges faced by a wife in Korea may be different from those in Germany - but that soon played no role when Sophie Melbinger in the lead role, fluctuating between naivety and laconic tone, struggled with seemingly incompatible requirements. The poetic ambivalence of the play, between the cot and the bear den, also convinced the jury, who awarded Yeon-ok Koh the international author's prize endowed with 5,000 euros: “How the play keeps various scenes and styles in balance and in harmony, that has us very, very fascinated. "

The pieces from the international authors' competition presented in readings had previously only been shown in Korea. The invited guest performances had already been shown at other international festivals. Two of the three titles should not have been unfamiliar to German theater fans - no big surprise, because new original pieces and adaptations of mostly Western classics are balanced on the theater schedules in Korea.

As the title "Death of a Mans Sale" suggests, director Hyuntak Kim does not take it very carefully with the faithfulness to the text. Although he assured that all of the text was taken from Arthur Miller's "Death of a Salesman", but the performance was more like a creative remix. Willy Loman, the traveling salesman, runs for his life on a fitness treadmill. His wife, children and other characters perform breakneck dances around him in constantly changing costumes and remind him of his transience. Willy - and with him the actor Jin Sung Lee - is increasingly sweating and finally collapses from exhaustion. The dream is over and the treadmill is at a standstill - this great performance would not have needed surtitling.

In the motley adaptation of “Romeo and Juliet” that Jung-Ung Yang brought to Heidelberg with his Yohangza Theater Company, the mixture of Shakespeare language and everyday insults was a bit confusing. With interspersed German lines, the actors and actresses quickly drew the audience to their side. The idea of ​​casting an actress in Romeo and reinterpreting Shakespeare's "forbidden love" between hostile families as a lesbian relationship may seem revolutionary in Korea, where LGBT rights are not yet majority-ruled. On the Heidelberg stage, the piece was more convincing because of its visual ideas. When Juliet and her Romeo jumped over an overturned couch together, some critics may have thought of the historic crossing of the border a few days earlier.


Compassion cannot be ruled out

“Before After”, the highlight of the guest performances, revolved around the Sewol catastrophe, from which the members of the Creative VaQi ensemble were only indirectly affected, as a result of the general trauma caused by this avoidable accident. By retelling and acting out their own crisis experiences - particularly impressively the actress Soo-Yeon Sung, who publicly dealt with her father's cancer death - they reflected on the limits of individual compassion and collective dismay. In the follow-up discussion, director Kyungsung Lee admitted that the decision to show this piece years later in a completely different context was not an easy one. Despite the danger of healed wounds tearing open again, the performance took place and the Heidelberg audience was bitterly delighted to hear a touching, thoughtful self-questioning. Even a ship accident that happened four years ago on the other side of the world can trigger compassion, as "Before After" emphatically demonstrated.

The audience used follow-up talks and panel discussions to learn more about the Korean theater scene. In particular, the censorship scandal under the last government and the current #MeToo debate aroused a lot of interest. Other questions raised by the contributions from Korea in Heidelberg had to remain open for the time being. Where are the starting points for theater makers in Germany? In what form is cooperation between the two countries possible? Unfortunately, there was little time for personal encounters between Korean and German artists during the crowded days. But at the final concert of the band SsingSsing, who interweave various singing traditions with drag and a good shot of punk, unanswered questions about cultural differences, identities and the limits of understanding were for the time being dissolved while dancing. 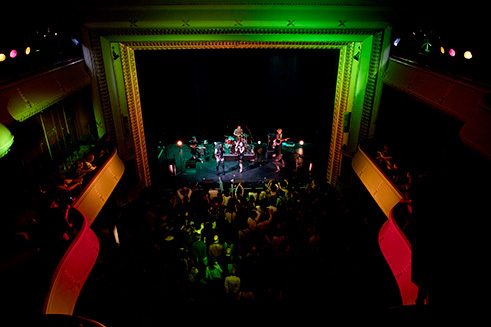 Jan Creutzenberg is a theater scholar and teaches at Ewha Womans University in Seoul. As @JanCreutzenberg and on his blog seoulstages.wordpress.com he tweets and writes about theater, music and art in Korea. He translated the three pieces from the international authors' competition into German.

Do you have any questions about this article? Write us!